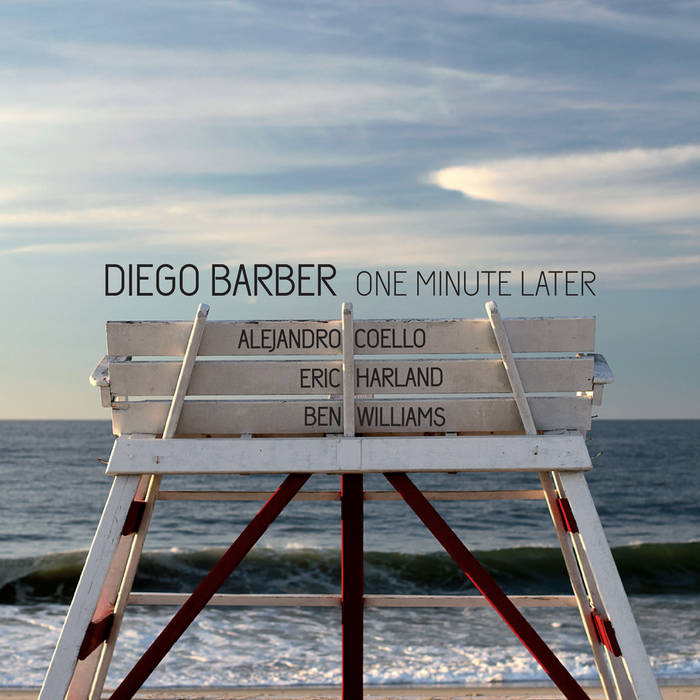 The Andalusia region of Spain stands apart from the rest of the country. There is a certain essence within the breathtaking natural surroundings and the culture, with hints of its Arabic past, that makes the region distinctive. These elements have inspired musicians for generations. Unsurprisingly, guitarist/composer Diego Barber, a native of Lanzarote in the Canary Islands, has long had an affinity for Andalusia, especially for the city of Granada; an affinity only made stronger by his regular visits there to be with his girlfriend.

Andalusian poet Federico García Lorca’s posthumous book Poeta En Nueva York , which describes Lorca’s time in New York and his affiliation with jazz musicians of the late 1920s, resonated with Barber. It was Lorca’s reflection on the emotional release of improvisers after a performance that inspired the title of Barber’s new recording, One Minute Later. The idea being that Barber identifies with these unnamed musicians’ feeling of catharsis after playing or completing a composition.

Barber’s work utilizes his dual affinities for classical music and jazz. Having come from a strict classical guitar background, Barber’s jazz playing has really blossomed since moving to New York. His composing bears witness to passions, as he writes in a classical style with jazz elements, creating a poetic blend of highly composed lyrical pieces that open up for the expressionism of jazz improvisation.

For One Minute Later, Barber recruited an incredible rhythm section in bassist Ben Williams and drummer Eric Harland. Both musicians are incredible technicians and fantastic accompanists. Harland has made a name for himself as one of the most exciting and expressive drummers in jazz, while Williams has become a force because of his ultra clean tone and incredible groove.

It was Barber’s discovery of wunderkind percussionist Alejandro Coello that drove Barber to make this recording. Barber was introduced to Coello by friend and virtuoso classical guitarist Ricardo Gallén. Barber was astounded by the proficiency of the 25 year old from Salamanca, who had just begun to teach at Hochschule für Musik Franz Liszt in Weimar, Germany (the youngest person to have done so).

Coello has an orchestral role within the ensemble. He utilizes a multitude of instruments on One Minute Later, including marimba, vibraphone, tympani, gongs, crotales, tam-tam and kalimba, creating tones and colors that make these compositions really stand apart. Most of Coello’s parts are written out, adding a precision within the energy generated by the ensemble.

Barber’s intent while writing the music was to create a diverse program of pieces that sound different from each other. The influences of classical and jazz are apparent in the music. There are also elements of more emphatically rhythmic genres like electronic dance music and rock that influence the structure and drive of many of the pieces.

The recording begins with a tradition of sorts for Barber: a song about a tree. Named for a flowering tree native to Andalusia, “Jacaranda” is introduced by drifting marimba tones and aleatoric guitar before the introduction of bass and drums generate a driving middle-eastern groove. The energetic “Atlas” is an older piece written about Barber’s impressions of the beauty of the Moroccan mountains. “Dilar River” is named for a tributary that Barber, a dedicated ultra marathoner, runs along daily, the piece providing a perfect example of Williams’s fantastic playing.

Highlighting the impressionistic harmonic colorations of the ensemble, the spacious “Mulhacen” is a haunting tribute to Spain’s third highest mountain. The gorgeous “Trevenque” is named for another mountain in the Sierra Nevada range in Spain that holds a place in Barber’s heart, as he can see it from his girlfriend’s home, which is located on Calle Casa Grande, which the ebullient “Big House” is named for.

Barber generates a subtle but driving intensity on “Veleta’s Peak” with the isolation of drums and the use of a sordena on his guitar, creating a distinctive percussion yet muted tone. The spare and beautifully played “Elvira Maria” is a heartfelt solo guitar ballad written for his girlfriend.

Diego Barber’s wonderfully crafted and emotionally charged One Minute Later displays the inherent romanticism generated by Andalusia and its people for an artist of extraordinary gifts and delivers a highly original and stimulating program of music.

Bandcamp Daily  your guide to the world of Bandcamp