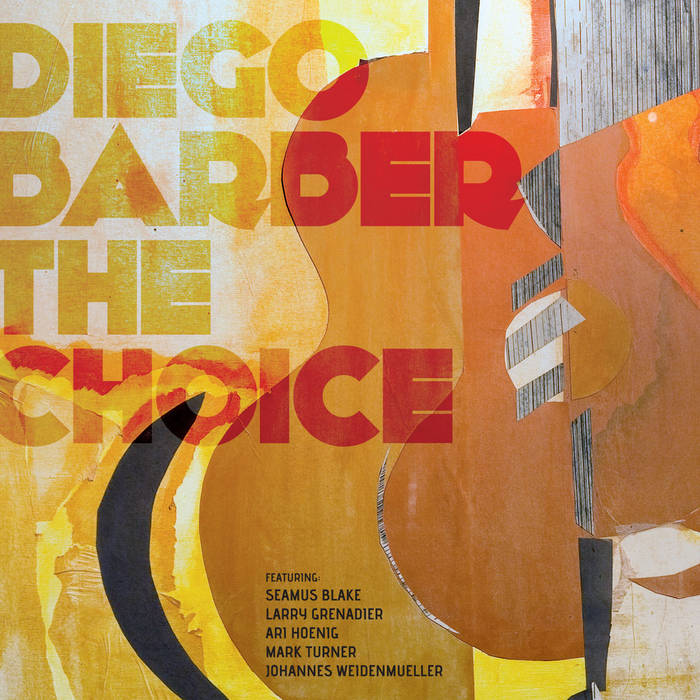 Generations of musicians and listeners have found inspiration and enjoyment from the guitar. The instrument, whose history spans more than a thousand years, remains a mainstay in nearly every form of music from rock to classical. Guitarist/composer Diego Barber has dedicated his life to the study of the guitar and composition. Barber views his relationship to the instrument as serendipitous, as if the guitar chose him. Barber’s new Sunnyside record, The Choice, is dedicated to the guitar, which has meant so much to him and allowed him to find his own paths of musical expression.

Through years of rigorous training and study, Barber has emerged as a prodigious talent on the classical guitar. His resolution to challenge himself and extend his musical vocabulary into jazz is an unusual choice for a classical musician. In doing so, Barber has extended his compositional voice, straddling the classical and jazz worlds. “I work a lot on the forms of my music, but I am not subjected to them,” expounds Barber. “One may perceive a great deal from formal composition, where my intuition naturally leads, but there is always room for improvisation. Everything has to flow.” Ample evidence of his command of technique and composition is displayed in his unique music.

Originally from Lanzarote, Canary Islands, Barber spent many years studying classical guitar and composition throughout Europe. Having performed professionally in several classical settings (including his first place win at the Classical Guitar International Contest in 2004), he moved to New York City in 2007 to pursue further study of jazz. Barber’s intent has been to bridge the divide between the genres.

The musical selections on The Choice are arranged in two parts: Barber’s compositions for jazz ensemble and a solo guitar sonata in three movements. The musical differences between the two seem to disappear as stylistic choices unify the pieces. The music of the fully written Sonata maintains the character of his jazz compositions, displaying an ability to write moving music regardless of genre and a style that is unique to the guitarist. Barber employs fantastic musical talent to flesh out his ensemble passages, including delightful playing from bassists Larry Grenadier and Johannes Weidenmueller, drummer Ari Hoenig, and saxophonists Mark Turner and Seamus Blake.

The ensemble pieces are structured to allow a full spectrum of color from the nylon-stringed guitar to shine alongside the conventional jazz instrumentation. Barber adds, “I have given a great deal of attention to the orchestration of the instruments. We are only four, but each instrument enters and exits at deliberate moments in a constant flow…”

The record’s first track, “To Annie,” is a lovely rhapsody that gently builds with the addition of the rhythm section. “Contraste” presents a singsong melody with Barber accompanied by the warm tenor of Mark Turner filtering from bright to dark as the pace quickens in a spirited solo section. “Jose’s House” gets a jolt of energy as Seamus Blake takes saxophone duty playing soulfully along with the dancing ensemble. Blake is also featured in the up-tempo “Ailanto,” taking inspiration from the swaying of a tree in the wind. Turner makes memorable appearances in “Chicago” and “Pittaluga,” the first a track with a weaving, knotty melody and ringing guitar, and the other a quiet study with an air of mystery.

The last three tracks on the CD form a solo guitar sonata entitled Sonata Ban D’Arguin. The sonata is inspired by Barber’s annual family travels in the deserts of Mauritania in Western Africa. “I composed the Sonata in the desert. Solitude is definitely one of the essential ingredients for my composition, along with constant work. Another essential factor is my curiosity, which takes me down unexpected paths,” explains Barber. Ban d’Arguin is a national park in Mauritania that stretches between the cities of Nouakchott and Nouadhibou. The sonata is a moving work inspired by a land where desert meets the ocean. Barber writes using counterpoint that allows him to play both melody and harmony in unison. He incredibly provides a rich palette of sound from a single instrument.

The first movement is entitled “Nouadhibou,” named after the largest city in Mauritania where the trip across D’Arguin begins. The weaving guitar melody represents the swelling of waves that are then mirrored by the rolling of sand dunes. The introspective quality of “Mauritania,” the second movement, captures the isolation and quiet of the desert. Barber’s guitar seems to float through the ether as the listener can easily imagine the vastness of the West African Sahara. “Nouakchott” is named for the capital of Mauritania and the end of the sojourn. The guitarist’s dexterity is captured fully as he blends the melody over a swirling cloud of chords. The music is equal parts colorfully electric and elegiac beauty, creating an inspiring balance.

On The Choice, Barber focuses on the guitar and it’s vast potential to express his unique musical ideas melding classical and jazz influences. The music that he creates is natural and cohesive, which has been a challenge for genre blends in the past. Barber’s decision to let his guitar shine (regardless of genre) is truly a gift to listeners.

Bandcamp Daily  your guide to the world of Bandcamp

Guests include Kassa Overall and Muriel Grossman, plus an LP of the week by Van Hunt.